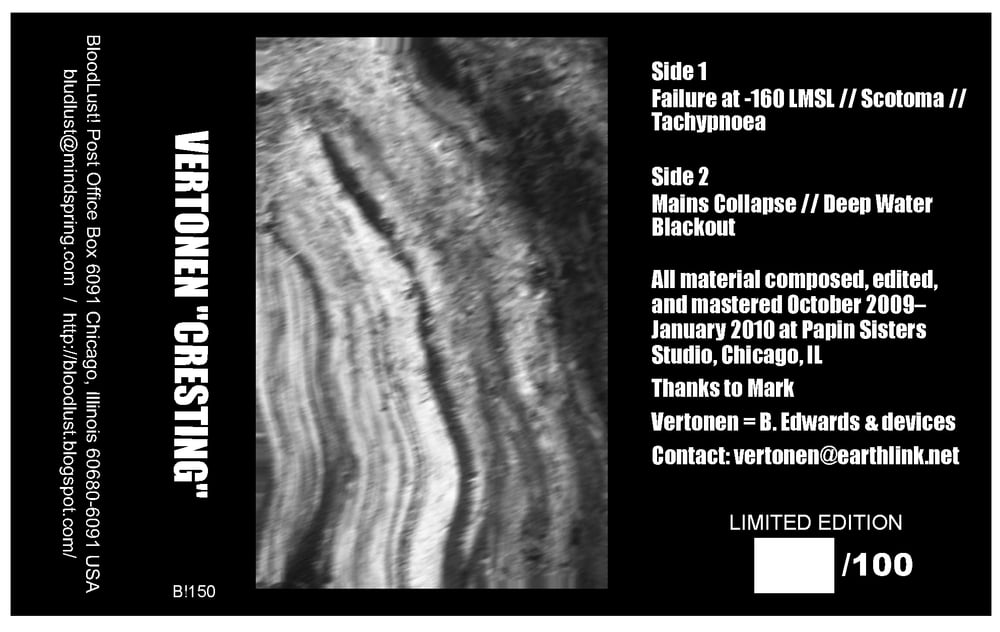 Blake Edwards, AKA Vertonen, is a noise/experimental music maker who I first saw perform in the odd setting of an outdoor festival at the University of Chicago, in the spring of 2001. I was immediately struck by his idiosyncratic style of metal-on-metal scrape and bash. Ten years later, and after BLOODYMINDED [and myself, solo, etc.] has played numerous shows on the same bill as Vertonen, Edwards is now my band mate in Anatomy of Habit [we were also previously in Animal Law together], and in AoH he is charged with even more ferocious and often more beautiful metal-on-metal scrape and bash. When he is not wielding rusty bits of amplified scrap metal, Edwards may sometimes be found behind the controls of a hulking Russian Polivoks analog synthesizer. Over the years, his infrequent synth-based performances have become a favorite of mine in Chicago, and when I began thinking about a Vertonen release on BloodLust!, I knew that it had to focus on that beast of a synth. "Cresting" is comprised of five medium-length compositions that run across 40-minutes of chrome tape, ranging from the more exploratory to the more abrasive; Housed in clear “Norelco” style cases with folded black and white photocopied j-cards. Limited to 100 numbered copies; Released in 2010

Tracklisting:
A1. Failure At -160 LMSL
A2. Scotoma
A3. Tachypnoea
B1. Mains Collapse
B2. Deep Water Blackout